SOLD, Request to be notified when similar board available | Western USA | Worldwide Shipping | Comment below or call 1-800-210-6714

Mickey Dora ‘Da Cat’ model 10’2 longboard made by Greg Noll in 1966-68. Featuring a jet-black color scheme with unique step down nose deck and matching glass-on fin. This collectors longboard has undergone restoration by way of adding black pigment to the board while retaining it’s original fiberglass. A stunningly beautiful example of the most prestigious longboard a surfboard collector could ever own. Don’t let this black cat get away!

If you have questions about this vintage surfboard or would like a shipping quote, scroll down to leave a comment or call us toll-free at 1-800-210-6714 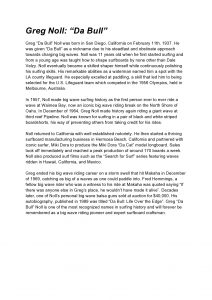