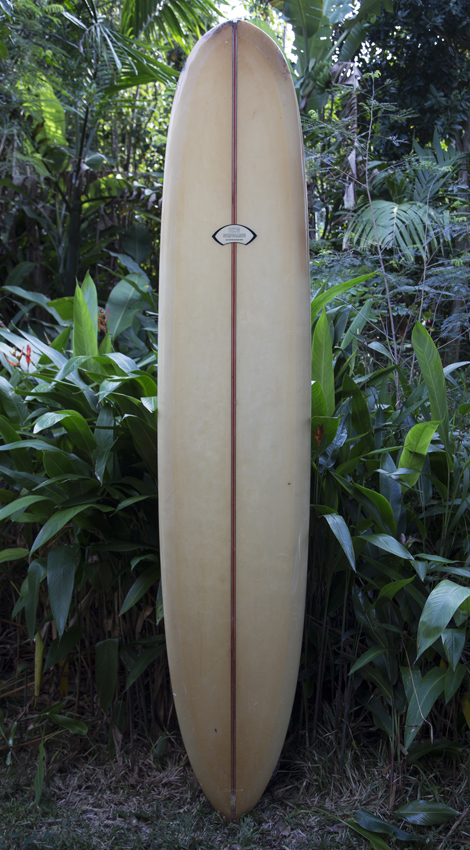 *SOLD, Request to be notified when similar board available| Board Location: Hawaii *Worldwide Shipping Available*

Nuuhiwa was born (1948) in Honolulu, Hawaii, the son of a Waikiki beachboy and martial arts instructor, and began surfing at age five, one year after his mother died. In 1961, after living with various relatives, the 13-year-old Nuuhiwa moved to San Francisco to live with an uncle, then two months later left for Southern California to look for his remarried father in Anaheim. He moved to Hermosa Beach in 1962 and lived with surfboard-makers Donald Takayama and Harold Iggy, and soon after began to compete in the juniors division of the United States Surfing Association, where he was nearly unbeatable, topping the year-end standings in 1964, 1965, and 1966. He won the juniors division of the 1965 United States Surfing Championships, then flew to Hawaii and took the juniors division of the Makaha International.

By that time, the 18-year-old Nuuhiwa was universally regarded as one of the world’s best surfers, he rode in a pliable open-knee stance, deftly blended one turn to the next, and cross-stepped with cool self-possession across the deck of his board. Expert in all facets of the sport—save big-wave riding—Nuuhiwa was a preternaturally gifted noserider, able to suspend himself on the tip for seconds at time. When Surfer magazine asked Phil Edwards to pick the world’s 10 best noseriders in 1965, he placed Nuuhiwa on top. “He was a pharaoh,” fellow Hawaiian-born surfer Reno Abellira later said. “David was surfing itself, noseriding to the adoring masses.” A first-generation surfing professional, Nuuhiwa signed endorsement deals in 1967 that were said to be worth $25,000.

American surfers expected the slender goofyfoot to cruise to a world title in 1966—he won the Surfer Magazine Readers Poll Award that year, and the David Nuuhiwa Noserider signature model by Bing Surfboards was the season’s hottest-selling board—but Australian regularfooter Nat Young, turning his board forcefully up and down the wave instead of riding the nose, won the championships easily (Nuuhiwa finished 12th), setting the stage for the late-’60s shortboard revolution.

Nuuhiwa receded into the background somewhat in 1967 and early 1968, then returned as a psychedelic glam-surfer with a quiver full of ornately airbrushed boards. He began to compete again, arriving at events behind the wheel of a paisley-covered Porsche 911, wearing aviator shades and a mink-trimmed coat, with one or two board-carrying lackeys in tow. Nuuhiwa’s compelling presence, as Sports Illustrated noted in 1969, was in part because the darkly handsome 6’1″ surfer was “one of the most unusual-looking young men in sport, [with] the imperious look of an Aztec king.” He won the U.S. Championships in 1968 and 1971, and was invited to the 1970 and 1971 Expression Session events.

In 1972, once again, Nuuhiwa was the consensus favorite going into the World Championships (again in San Diego), where he appeared to edge out Hawaiian surfer Jimmy Blears in the finals, but was instead given second place. Nuuhiwa more or less dropped off the scene for 10 years (making a brief public appearance in 1977 to win the Grog’s Seaside Pro contest in New Jersey), developed a drug habit and quit surfing, then returned in the early ’80s as a part-time patriarch for the longboard renaissance.

Nuuhiwa appeared in more than a dozen surf movies of the ’60s and early ’70s, including The Performers (1965), Golden Breed (1968), Wave of Change (1970), and Five Summer Stories (1972). He was also featured in Rainbow Bridge (1971), a documentary on rock guitarist Jimi Hendrix. He was named World’s Best Surfer in International Surfing Magazine‘s Hall of Fame Awards in 1966 and 1967. In 1991 he was inducted into the International Surfing Hall of Fame in San Diego; 10 years later he was inducted to the Huntington Beach Surfing Walk of Fame. Surfer magazine named Nuuhiwa #31 in a 2009 list of the 50 Greatest Surfers of All Time.

David Nuuhiwa Surfboards opened in Huntington Beach in 1968 and folded before the year was out; Nuuhiwa later worked as a surf shop manager, then as a union laborer for trade shows and expositions.

Bing Surfboards: Market-wise surfboard manufacturer from Hermosa Beach, California; founder of Bing Surfboards, one of the sport’s best-known brands in the 1960s. Born Herbert Bingham Copeland (1936), in the Los Angeles County oceanfront suburb of Torrance, Bing was raised in nearby Manhattan Beach, and began surfing at age 13, with future big-wave crusher Greg Noll. Copeland and Noll both learned how to make surfboards from American board-manufacturing pioneer Dale Velzy.

Copeland joined the Coast Guard and was stationed in Hawaii from 1955 to 1957; the following year he and surfing friend Rick Stoner set out on a six-month oceangoing surf cruise across the Pacific, with stops in Hawaii, Tahiti, Moorea, Bora Bora, and Fiji. They ended their journey with a two-month stay in New Zealand, where they introduced the Malibu surfing style to the wave-ski-riding locals, and together built about 10 boards to leave behind as gifts.

In September 1959, a few months after returning home, Copeland opened Bing Surfboards on the Hermosa beachfront (Stoner opened Rick Surfboards shortly after); in 1963 he moved the shop to Pacific Coast Highway and went on to become one of the most popular boardmakers of the decade. Surfer/shaper Donald Takayama was an early Bing team rider; shaper Dick Brewer produced the Bing Pipeliner model in 1967 (a board, as surf historian Mark Fragale later noted, that “forever changed the parameters for big-wave guns and speed designs”); California surfer Rolf Aurness won the 1970 World Surfing Championships on a Bing surfboard.

The company’s most famous surfer was Hawaiian-born David Nuuhiwa, who fixed his name to two hot-selling Bing models, the Noserider and the Lightweight. Both came out of the gates strong in terms of sales, but the shortboard revolution was about to overhaul all surfing design parameters, and by early 1968 the Nuuhiwa models were all but forgotten.

The late ’60s shortboard revolution was disastrous for all established board manufacturers, as surfers by the thousands flocked to small label “backyard” builders, who were quicker to pick up on the newest designs. Bing Surfboards survived, and in 1973 began to market the bonzer, a futuristic board invented by Malcolm and Duncan Campbell, with a double-concave bottom and three fins—design features that would later become standard. But Copeland had by that time grown tired of the business, and was feeling estranged from the longhaired surf scene; in 1974 he licensed the shop name and moved with his wife and three children to Ketchum, Idaho, where he became a partner in a moving and storage business.

In 2003, Copeland was inducted to the Huntington Beach Surfing Walk of Fame. Bing Surfboards: Fifty Years of Craftsmanship and Innovation was published in 2008.