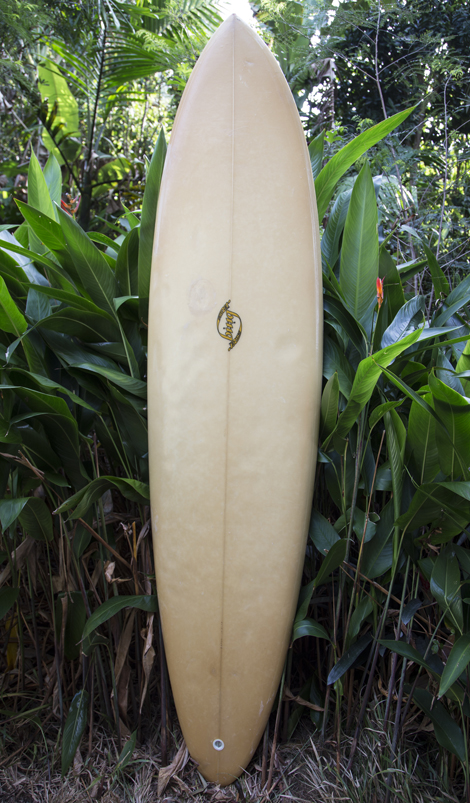 *SOLD, Request to be notified when similar board available| Board Location: Hawaii *Worldwide Shipping Available*

Mike Eaton: Tireless and unobtrusive surfboard shaper from San Diego, California; best known as a leader of the longboard renaissance in the ’70s and early ’80s. Eaton was born (1934) in New York, New York, raised in Palos Verdes, California, and began surfing at age 14, helped along by seminal surf figure Tom Blake; Eaton used to transport his heavy wooden board to the Palos Verdes Cove using an army stretcher customized with a pair of rear-mounted wagon wheels.

Eton began shaping surfboards in 1955 for wetsuit magnate-to-be Jack O’Neill, out of O’Neill’s San Francisco garage/surf shop. In the late ’50s and early ’60s, Eaton worked as a whale trainer at Marineland, a Palos Verdes ocean animal theme park, and not until 1965 did he become a full-time shaper, working simultaneously for Bing Surfboard and Rick Surfboards, both located in nearby Hermosa Beach.

By 1968, Eaton had left Rick and was shaping as many as 20 boards a day for Bing; in 1970 he introduced a wide-backed square-tail version of the twin-fin, which had a burst of popularity in 1971 and 1972; in 1973 he produced a ballyhooed but unsuccessful version of the bonzer, the first three-fin board. Bing Surfboards by that time had been purchased by San Diego–based Gordon and Smith Surfboards (G&S); Eaton was meanwhile having second thoughts about the late-’60s shortboard revolution—a 1974 G&S ad shows an 8’2″ Eaton-made “Fun Shape,” and asserts that “80% of all surfers would be better off with an eight-foot board.”

While the longboard renaissance wouldn’t begin in earnest for another few years, and Eaton continued to make shortboards—he crafted some of the finest big-wave guns of the ’70s— Eaton-produced longboards sold in ever-higher numbers from 1975 on. Eaton Surfboards was founded in 1978 in San Diego, and by 2002 Eaton estimated he’d made more than 50,000 boards. Paddleboards were added to the Eaton line in 1989, and Eaton himself competed five times in the grueling 32-mile Catalina Classic paddleboard race, entering for the last time in 2005, at age 71.

In 2008, Eaton shut his factory and moved to Hawaii.

Bing Surfboards: Market-wise surfboard manufacturer from Hermosa Beach, California; founder of Bing Surfboards, one of the sport’s best-known brands in the 1960s. Born Herbert Bingham Copeland (1936), in the Los Angeles County oceanfront suburb of Torrance, Bing was raised in nearby Manhattan Beach, and began surfing at age 13, with future big-wave crusher Greg Noll. Copeland and Noll both learned how to make surfboards from American board-manufacturing pioneer Dale Velzy.

Copeland joined the Coast Guard and was stationed in Hawaii from 1955 to 1957; the following year he and surfing friend Rick Stoner set out on a six-month oceangoing surf cruise across the Pacific, with stops in Hawaii, Tahiti, Moorea, Bora Bora, and Fiji. They ended their journey with a two-month stay in New Zealand, where they introduced the Malibu surfing style to the wave-ski-riding locals, and together built about 10 boards to leave behind as gifts.

In September 1959, a few months after returning home, Copeland opened Bing Surfboards on the Hermosa beachfront (Stoner opened Rick Surfboards shortly after); in 1963 he moved the shop to Pacific Coast Highway and went on to become one of the most popular boardmakers of the decade. Surfer/shaper Donald Takayama was an early Bing team rider; shaper Dick Brewer produced the Bing Pipeliner model in 1967 (a board, as surf historian Mark Fragale later noted, that “forever changed the parameters for big-wave guns and speed designs”); California surfer Rolf Aurness won the 1970 World Surfing Championships on a Bing surfboard.

The company’s most famous surfer was Hawaiian-born David Nuuhiwa, who fixed his name to two hot-selling Bing models, the Noserider and the Lightweight. Both came out of the gates strong in terms of sales, but the shortboard revolution was about to overhaul all surfing design parameters, and by early 1968 the Nuuhiwa models were all but forgotten.

The late ’60s shortboard revolution was disastrous for all established board manufacturers, as surfers by the thousands flocked to small label “backyard” builders, who were quicker to pick up on the newest designs. Bing Surfboards survived, and in 1973 began to market the bonzer, a futuristic board invented by Malcolm and Duncan Campbell, with a double-concave bottom and three fins—design features that would later become standard. But Copeland had by that time grown tired of the business, and was feeling estranged from the longhaired surf scene; in 1974 he licensed the shop name and moved with his wife and three children to Ketchum, Idaho, where he became a partner in a moving and storage business.

In 2003, Copeland was inducted to the Huntington Beach Surfing Walk of Fame. Bing Surfboards: Fifty Years of Craftsmanship and Innovation was published in 2008.