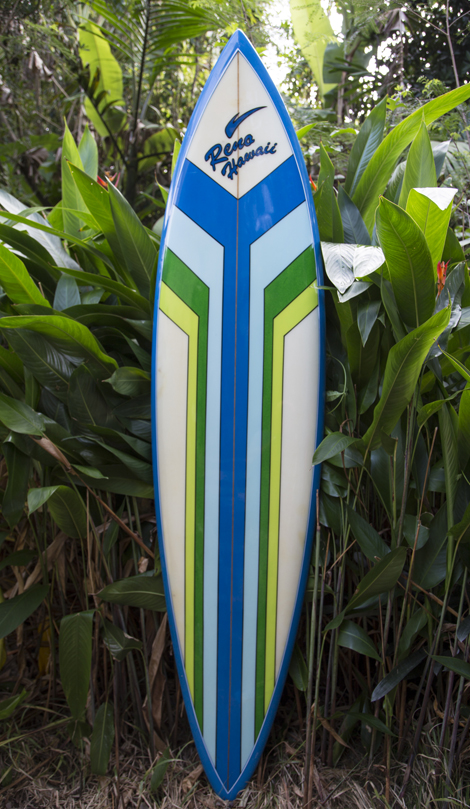 7’6 Reno Abellira vintage surfboard with original single fin made in the mid 1970s. This board was fully restored by a surfboard restoration expert with over 30 years of glassing experience.

Reno Abellira: Stylish, enigmatic regularfooter from Honolulu, Hawaii; world-ranked #4 in 1977, and a central figure throughout the first decade of shortboard surfing. Abellira was born (1950) and raised in Honolulu, the son of a middleweight boxer who was shot and killed in a barroom fight. Abellira began surfing at age four in Waikiki, but didn’t get his first board until 11. He won the juniors division of the Makaha International in 1966 and 1967, and earned $200 for winning the 1966 Hawaiian Noseriding Contest, the state’s first professional surfing event.

Abellira was Hawaii’s juniors division champion in 1968, and made his international debut later that year in the World Surfing Championships, held in Puerto Rico. Although he placed sixth, many observers thought the small-framed (5′ 7″, 135 pounds) 18-year-old was the event’s most exciting surfer, as he consistently rode just beneath the curl on a stiletto-like purple surfboard. “It was a skateboard,” California surf publisher Dick Graham wrote, marveling at Abellira’s radical new equipment, “and he rode it like a god, because he is one.”

Abellira’s style continued to develop over the next three years. He rode in a low crouch, chin tucked into his left shoulder, arms extended, wrists cocked, each part of his body precisely arranged. Whether or not the streamlined stance added speed to Abellira’s surfing is impossible to say, but nobody in the ’70s—except for Australia’s Terry Fitzgerald—looked faster on a surfboard. Abellira also proved to be one of the sport’s most mysterious figures: he kept to himself for the most part, rarely smiled, and countered the scruffy surfer image with Italian-made leather loafers, pressed linen pants, and neatly coiffed hair. “He’s a bit of a dandy,” Australian surf journalist Phil Jarratt wrote of the dark-eyed Hawaiian, “and could teach most surfers a thing or two about color coordination.”

Abellira competed regularly throughout the ’70s, winning state titles in 1970 and 1972, placing fourth in the ’70 World Championships, second in the 1973 Duke Kahanamoku Classic, and making the finals in more than a dozen professional events on the North Shore of Oahu. He was also an Expression Session invitee in 1970 and 1971. In what many still regard as surfing’s most thrilling big-wave contest, Abellira beat fellow Hawaiian Jeff Hakman by a fraction of a point to win the 1974 Smirnoff Pro, held in cataclysmic 30-foot surf at Waimea Bay. Among the first Hawaiians to set out on the pro circuit, Abellira was world-ranked #4 in 1977, #8 in 1978, and #13 in 1979.

Abellira was also a first-rate surfboard shaper, learning the craft from boardmaking guru Dick Brewer in the late ’60s and early ’70s, then going on to work for the Lightning Bolt label; Abellira and Brewer together experimented with an early version of the tri-fin design in 1970 and 1971. Mark Richards of Australia later became an international surf hero while riding Abellira-shaped boards, and it was Abellira’s stubby double-keeled fish that inspired Richards to produce in 1977 the twin-fin design that swept through the surf world in the late ’70s and early ’80s.

While Abellira was for the most part removed from the surf scene beginning in the early ’80s, over the decades he has occasionally produced thoughtful and eloquent articles for the American surf press. Abellira made headlines himself in 1993 when he disappeared for several months after being indicted on cocaine distribution charges; he was later convicted and spent several months in prison.