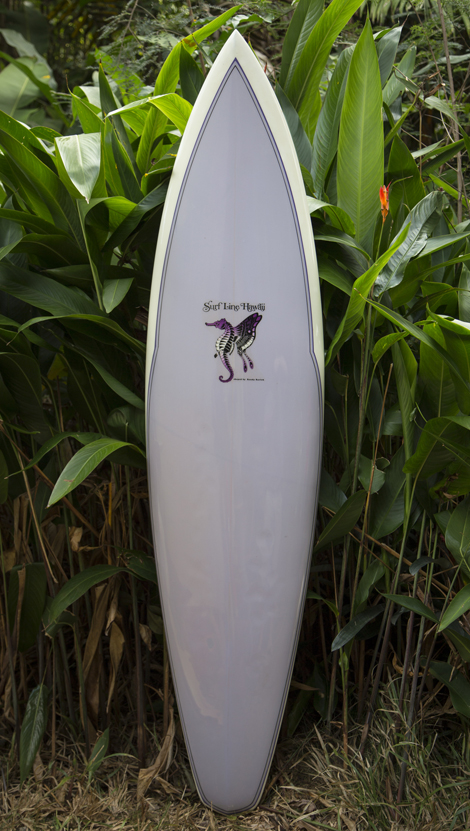 6’5 Randy Rarick shaped vintage Surf Line Hawaii board made in 1973. This vintage surfboard has been fully restored by our surfboard restoration expert with over 30 years of experience.

Randy Rarick: Authoritative surf traveler/organizer/boardmaker from Sunset Beach, Hawaii; semifinalist in the 1970 World Surfing Championships; executive director of the Triple Crown of Surfing from its 1983 inception until 2012. Rarick was born (1949) in Seattle, Washington, moved with his family to Honolulu at age five, and began surfing at 10, under the tutelage of fabled beachboy Rabbit Kekai. He won the juniors division of the 1967 state surfing championships; three years later he nearly made the finals of the 1970 World Championships, held in Victoria, Australia, and was invited to the Duke Kahanamoku Classic and Smirnoff Pro-Am.

Rarick’s first overseas surf trip was in 1968, just after high school, when he flew to Australia and stayed for nearly a year, in part to avoid the draft. He began making annual visits to South Africa in 1971, and in the decades to come the ruddy-faced regularfooter traveled to coastlines near and far, eventually surfing in more 60 countries, including Angola, Greece, Namibia, Albania, Colombia, Sri Lanka, Ghana, India, and Lebanon. Rarick was the only candidate when Bruce Brown hired a location scout in 1992 for his new movie Endless Summer II. (Surfing magazine later named Rarick the sport’s “Most Traveled” surfer, noting that he’d ridden waves in over 60 countries.

Rarick always returned from his travels to be on the North Shore of Oahu for the winter surf season, and in 1976, at age 26, he and 1968 world champion Fred Hemmings were the two principal organizers of the International Professional Surfers (IPS) world circuit, precursor to today’s Association of Surfing Professionals (ASP) tour. Hemmings for the most part dealt with contest sponsors and the media; Rarick was liaison to the pros themselves and general troubleshooter. Both lost money on the IPS; both had to retrench following the 1982 ASP takeover, with Rarick going on to become an ASP board member and head of the Triple Crown, the circuit-within-a-circuit made up of three North Shore contests.

Rarick has long been known as one of the sport’s most reliable figures. “Of all the surfers who made a difference over the past 30 years,” sports writer Bruce Jenkins wrote of Rarick in “Mr. Clean,” a 1998 Surfer’s Journal profile, “he’s among the handful who never changed. Never took drugs, never bailed out, never lost his stoke, never stopped ripping.”

Rarick had made his living primariliy from surfboard shaping, a craft he learned as a teenager from master Hawaiian shapers George Downing and Dick Brewer. In the late ’60s and ’70s, he worked for Surf Line Hawaii, Dewey Weber Surfboards, and Lightning Bolt, and made boards for big-wave rider Buzzy Trent, 1972 world champion Jimmy Blears, and Hawaiian surf icon Rell Sunn, among others. From 2001 to 2011, Rarick produced and curated the Hawaiian Islands Vintage Surf Auction; the 2011 auction, held at Blaisdell Center in Honolulu, featured 110 items (rare boards, posters, art, and clothes) that sold for $600,000 total.

Rarick appeared in a small number of early- and mid-’70s surf movies, including Tracks (1970), Oceans (1972), and A Winter’s Tale (1974); since 1970 he’s written more than three dozen surf articles and columns, mainly for Surfer and Surfing magazines. In 2007, Rarick received a SIMA Lifetime Achievment Award.

Rarick has been married twice. As of 2013, he’d been living in the same Sunset Beach house since 1975.

In 2015, Rarick was elected to the Hawaii Sports Hall of Fame.