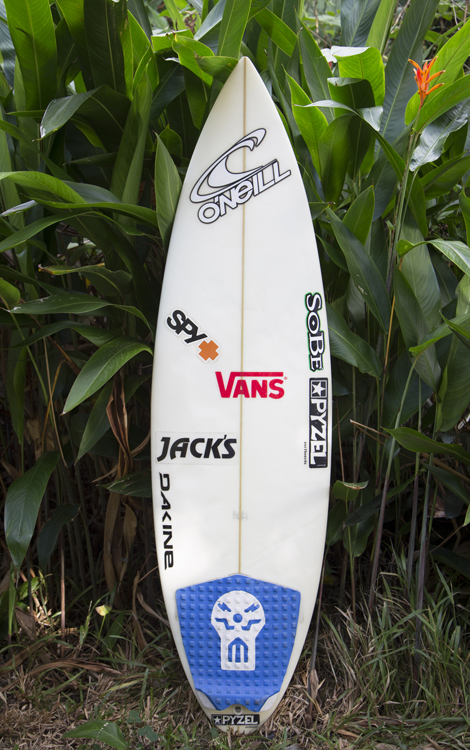 5’2 John John Florence personal grom board. The board is all original and has the discontinued “John John super grom model fins”.

Lanky pro surfing phenomenon from the North Shore of Oahu; two-time winner of the Vans Triple Crown of Surfing; WCT-ranked #3 in 2014, by which time he was regarded by most as the world’s most advanced surfer. “To be this good,” surf writer Brian Roddy wrote, “to be this adored, to have his skills so acknowledged by everyone from Reynolds to Slater, is something of a wonder.” Or as writer Erik Cannon phrased it, “Must be nice to have to the world by the balls.”

Florence, a blond-haired, blue-eyed, well-tanned surf industry marketer’s dream, was all but preordained for a life of surf stardom. He was born (1992) in Haleiwa to Alexandra Florence, a single mother and talented longboarder who strapped young John John into a life vest and pushed him into his first waves as a toddler. At eight, the pint-sized regularfooter was riding smaller days at the Pipeline; four years later he was learning the ropes at Waimea Bay.

In 2005, at 13, Florence was given a wildcard entrance slot to the Vans Triple Crown, becoming the series’ youngest-ever competitor. Though he grew up just across the sand from Pipeline, fellow locals were shocked at how quickly Florence grew accustomed to powerful surf. “I remember seeing him out there,” fellow North Shore hellion Jamie O’Brien recalled, “and I’m thinking ‘God, he’s fucking young, he’s going to get drilled. And he did. But he never gave up.”

The most gifted tuberider of his generation, Florence complemented his preternatural ease in big hollow surf with above-the-lip tail throws and a full repertoire of aerial maneuvers, whipping his long-limbed frame (6’0″, 180 lbs) into air reverses with a casualness learned from years spent skating halfpipes.

After a string of national amateur titles, Florence qualified for the ASP World Tour at the end of 2011. That same year, the 19-year-old won both the Vans World Cup at Sunset Beach, two Pipeline events (the Volcom Pipe Pro and the Da Hui Backdoor Shootout), and the Triple Crown. In 2012, he notched his first win on the WCT at the Billabong Pro Rio. “Kid doesn’t surf with the restrictions of most,” Stab magazine observed a few weeks later. “He doesn’t care about dizzying heights, hell-sent barrels, or knee-break landings. And everything stays so buttery smooth!”

In 2013, Florence again won the Triple Crown, and his finals match-up against Kelly Slater in the Pipeline Masters (advantage Slater) was the best heat of the year. In 2014, Florence went on a tear during the back half of the season, posting a first (in the Quiksilver Pro France), a 2nd, a pair of 3rds and a 5th, on his way to a #3 finish for the year. In big, terrifying blue barrels at Teahupoo, for the Billabong Pro Tahiti, Florence and Slater again staged the finest heat of the season, with Slater again getting the nod. It was Florence 1st and Slater 2nd, however, in the 2014 Surfer Poll Awards.

Done, Florence’s first biopic, was released in 2013. His follow-up, 2015’s View from a Blue Moon (directed by Blake Kueny and narrated by actor John C. Rielly) was described by the Inertia as “most visually orgasmic addition to the canon of surf cinema ever. Florence also had star turns in Lost Atlas (2010) and Dear Suburbia (2012), both made by Kai Neville.