Gerry Lopez has been one of the biggest inspirations for surfers today, and there are many reasons why. Born and raised in Honolulu, Hawaii, Lopez started surfing the semi-secret reefs around Aina Haina. It was evident early on that Lopez had a natural talent for surfing. He took inspiration from the infamous Paul Strauch, a fellow Hawaiian born surfer with a surfing style composed of effortlessness and grace. It didn’t take long for the general public to recognize Gerry’s natural talent, solidified by winning the Hawaii State Championship at the young age of fourteen.

Lopez began frequenting the famous surf break of Ala Moana Bowls which is where he put an edge on his style and matchless tube riding skills. His technique became tailored and perfected, and his poise on the board became unique and identifiable as only his. Lopez, along with some friends, migrated out to Oahu’s North Shore looking up to prominent surfers like Jock Sutherland and Butch Van Artsdalen who surfed the heavy waves at Banzai Pipeline. This was during the time when surfboard design had started to assimilate downrailer edges and curves allowing riders to maneuver into the fast moving waves of Pipeline. Lopez realized that performance levels would expand from the riding of waves at “Pipe” and thus committed to mastering the break. Before long, he was recognized as the greatest tube rider in the world and from then on was referred to as “Mr. Pipeline”. Lopez went on to claim the title of Pipeline Masters Champion in 1972 and 1973. He was also titled as the ‘Waterman of the Year’ in later years. His passion for surfing and love for water sports enabled him to earn respect from everyone in the surfing world.

Lopez also developed an interest in surfboard shaping and made many significant contributions to commercial surfboard manufacturing. Along with Jack Shipley, Lopez co-founded the iconic ‘Lightning Bolt Surfboards’ label, which was an elite brand that produced high performance, high quality shortboards. He also created the elegant Lightning Bolt jag, which reflected his unique and simplistic style and became exceptionally popular among surfers in the 1970‘s. Interestingly, the Lightning bolt brand was the first label to actually sponsor riders with surfboards free of cost, mostly because quite often talented riders couldn’t afford good surfboards. A jack of all trades, Lopez has also acted in films such as “Conan the Barbarian”, “North Shore”, “Farewell to the King”, and “Big Wednesday”. He’s also appeared in many surfing documentaries, ads, and catalogs. Lopez also published a book titled “Surf is Where You Find It”. Undoubtedly, Gerry “Mr. Pipeline” Lopez and his graceful style of riding waves will be be admired for many generations to come. 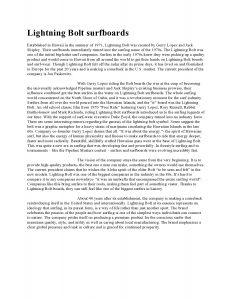